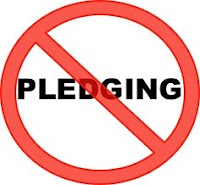 The onset of recruitment activities in fraternal organizations across North America leads to the onset of pledging activities. The former involves the best of fraternity – self-governance, building friendships, creating connections, etc. The latter, in my view, represents the worst of fraternity.

I believe it is time to consider eliminating pledging from the fraternity experience. Of course, this is a decision each fraternity needs to make on their own. However, it’s become ridiculous to see how much we bend over backwards to keep some form of pledging alive. 12 weeks, 8 weeks, 4 weeks. Instead of shortening the pledge periods, or trying to soften their effect by creating elaborate “member education programs,” I think we’ll solve many problems by just scrapping pledging altogether.

At least a couple of national fraternities have tried to eliminate pledging (most recently in 1989). Typically, these attempts are thwarted by alumni who couldn’t go along with the idea of a pledge-free experience. Zeta Beta Tau continues to be pledging-free. New members must be initiated within 72 hours of receiving a bid. I would challenge ZBT to more actively promote this, since it is a very distinguishable selling point.

Most fraternities hold tightly to pledging as if it was part of our founders’ vision. Pledging was something added to the fraternity experience much later, and we existed for many years without it. It emerged in the early 1900’s. How it came about is unclear. Some sources point to the influx of G.I. Bill students who brought military-style rites of passage into fraternities. Other sources claim it to be just an outgrowth of hazing activities older classes inflicted upon new freshmen (imagine kids wandering the campus wearing beanies). The point is, pledging wasn't there from the start, although we act as if it was. Pledging wasn't a necessary change or evolution of fraternity - it was an add-on. Add-ons can be removed.

Pledging has never served a critical purpose. The best pledging programs can be useful, and perhaps even beneficial to the fraternity. However, can these benefits only be gained by pledging programs? Do the positives outweigh the negatives? I cannot think of any compelling reasons why pledging is necessary for the health and sustainability of fraternal organizations. I can think several reasons why it could continue to be our downfall. Chief among these is hazing, one of the single biggest reasons men will not join our organizations.

My biggest problem with pledging is that it leads to apathy. Why would we take committed, eager, energetic young men, and right from the beginning of their experience, give them a finish line? That’s what initiation has become in most fraternities and sororities. It’s viewed as the end, and not the beginning.

Those that cling to pledging argue that it’s the best way for a new member to learn about the history and values of the fraternity. Really? I’d bet that in 90% of fraternities that use pledging as the primary educational vehicle, 90% of the chapter forgets everything they were taught in pledging. History can be conveyed to new members outside of the pledging structure. Values are taught through Ritual, which is something used continuously – again outside of the pledging structure. Pledging is not the only (or even the best) vehicle to teach history and values.

Proponents of pledging also argue that it creates pledge class unity. Why do we care so much about pledge class unity? We don’t need to force unity upon a group of men who will likely bond anyway due to their similar ages, class year, and life experiences. As Dave Westol and others have taught me, individuals join a fraternity, not a pledge class.

Finally, those who argue for pledging describe it as the best way to test the commitment level of potential initiates. If this were true, we wouldn’t have member apathy as an issue of concern in almost 100% of our chapters. Commitment can be judged based on a recruit’s past experiences (the best predictor of future behavior). Pledging is a false test of commitment.

So what should we do instead? Recruit better. We should employ effective, well-designed, and disciplined recruitment processes that allow us to investigate a man’s character before we offer a bid. We should take time to get to know his past accomplishments and his future goals. Maybe we should even demand recommendation letters from high school teachers or coaches? After we give him a bid, we should immediately assign him a mentor (such as a big brother) who helps him learn fraternity history, policies, and responsibilities. We should immediately include him in all fraternity activities except for Ritual activities. We should then initiate him as soon as possible.

I believe that the national fraternity that eliminates pledging, gains buy-in from alumni and undergraduates by arguing the points described above, and then promotes a pledging-free experience to potential members, will see immediate benefits. Alumni may be angry. Give them a fraternity that grows and excels, and they will get over it.

Let’s quit tinkering around the edges and instead, show boldness that would make our founders proud. It’s time for pledging to go. We don't need it anymore. Actually, we never did.