The Legacy of the Great Snowball Rebellion

As Fraternities and Sororities, Defiance is in our DNA

Unless you are reading this from Guam, chances are you have been impacted by snow this winter. I write this as I’m stranded in San Antonio because of a snowstorm in Texas!

Snow can be beautiful, elegant, and fun. It’s the stuff of Bing Crosby’s fondest dreams. However, almost every person curses it at some point or another because it can also be frustrating, inconvenient, and dangerous. Nothing turns us faster against our elected leaders (see Mike Bloomberg) than unplowed streets. It’s a love/hate relationship for sure.

Did you know, however, that snow led to one of the most defining moments in the history of fraternity life? Without it, we most likely wouldn’t be the same organizations we are today. I’m referring to the Great Snowball Rebellion of 1848.

The scene was Miami University, which along with Union College, is often referred to as the Mother of Fraternities. The birth of the Miami Triad (Phi Delta Theta, Sigma Chi, and Beta Theta Pi) was instrumental in the eventual birth of many other fraternities and the growth of the fraternity movement nationwide.

At the time of the rebellion, two fraternities existed at Miami – Alpha Delta Phi (the first fraternity formed West of the Allegheny mountains) and Beta Theta Pi. At first, the fraternities were welcomed by a President named Bishop, who eventually lost his job partly because of it. The board of trustees did not trust the fraternities, and at their urging, an “anti-secret society” resolution was passed by the faculty. Flash forward to 1848, when the university was led by a President named Erasmus McMaster who continued the anti-fraternity mood on campus.

Miami wasn't alone in condemning fraternities. Our founders and early members could have given it all up. But anything worthwhile is also worth fighting for. 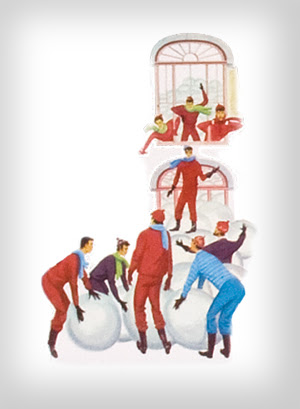 The students at Miami were frustrated with McMaster's attitude, and a tipping point was reached. On January 12, 1848, a large snowfall struck the campus. A few members of the two fraternities saw a chance to make a statement. In the middle of the night, they rolled giant snowballs up to the doors of the primary building on campus – Old Main. The snow and ice acted as a barricade, shutting down the most important building on campus. The janitor arrived that morning to the scene and then contacted McMaster, who was furious. He announced at chapel that morning that every student who was involved would be expelled.

The response from the students was to double-down. More snow arrived and that night the students recruited more of their fraternity brothers to help. The doors weren’t enough for them this time. They packed tremendous amounts of snow and ice in the hallways of the building, bracing their piles with chairs, benches, and wood. The temperature dropped and the snow froze like a block of ice, making the building an unusable mess. The students thought that their numbers would actually work in their favor – that the President couldn’t expel all of them. They were wrong. The university was shut down, trials were held, and after the expulsions, only 68 out of 200 enrolled students remained.

Each time a student was expelled, he would be carried off on the shoulders of his classmates. The students even hired a band to play as their peers cheerfully left the campus.

An enrollment drop of that magnitude did not bode well for McMaster and he was fired by the Trustees shortly after the incident. A new President, Anderson, was hired and he changed the environment to be more welcoming to fraternities. Within a couple of years, enrollment surpassed 200.

Several of the expelled students eventually enrolled at Centre College in Kentucky and formed fraternities there, including the second chapter of Beta Theta Pi. Phi Delta Theta was formed at Miami a year after the rebellion.

The defiance embodied in the snowball rebellion remains in the DNA of fraternities and sororities today. It was one of the earliest markers of our independence as organizations; independence that’s asserted day in and day out on campuses across North America.

The relationship between the college fraternity and the host institution has always been tenuous. Our earliest founders created us because they wanted to provide the human bonds and relationships that colleges at the time purposely tried to avoid. We were seen as a threat because we taught values and debated questions that didn’t fit within the traditional educational environment. We sought to raise the college experience from one that focused only on the stuff of textbooks to one embracing the stuff of life. We wanted colors in our members’ lives other than gray limestone and red bricks.

And we did a really good job of this. So good, that colleges and universities began to embrace what we had to offer (albeit cautiously). More recently, institutions of higher education have lifted the things we were once sole proprietors of – namely relationship building and leadership development – and infused them into other places on campuses. Residence hall learning communities, for example, are direct knock-offs of the original fraternity experience.

However, this doesn’t mean that these institutions embrace Greek-Letter Organizations. In many cases, they may be purposely giving students a more appetizing alternative to fraternities and sororities – signaling the continuation of distrust that institutions have held for them since the days of giant snowballs.

Because defiance is such a part of who we are as fraternities and sororities, I wonder if we can ever avoid it. Even the fraternity or sorority that walks the line most closely on a given campus has the itch to step off every once in a while.

College and university administrators, especially those that do not work directly with Greek-letter organizations, get so frustrated by this. Why wouldn’t they? We can be loud and contentious. We don’t like new rules, and will speak out against them. We like our independence, and sometimes seem to live in our own universe. We still act like the groups that meet in a hidden attic somewhere and would rather be left alone.

And that often leaves us at odds. But, could it all be one big misunderstanding?

To understand us, one needs to know our history. Every defining moment in the fraternity and sorority movement is marked by defiance. Let’s not forget that women’s fraternities and multicultural Greek organizations were also developed in defiance of the status quo. We have always been an outlier because we needed to be.

Now – this is not to say that rules and policies are not important. Even wrongheaded policies are created in order to protect someone – an individual or an organization. Many of our risk management policies, for example, are cumbersome and annoying, but almost all can be justified. The defiance in our DNA does not give us a license to simply break the rules because we feel like it. It may lead us to challenge them more than other groups, however. It’s rare that a new policy isn’t met with some debate by Greek-Letter Organizations, and that’s a good thing. Leave the blind unquestioning adherence to someone else.

So what’s the point of all this? It helps to remember how rebellion and defiance have shaped us. And, it can be a big part of our future. There may be fewer places in the world where taking a stand and showing conviction are rewarded, but at least we can still strive to be one.

In addition, will the problems in our world more likely be solved by rule-following conformists or restless disruptors?

Perhaps it’s time to stop fighting against this inherent rebelliousness in fraternities and sororities, and embrace it instead. How can it help our organizations and the host institutions alike?

I like to keep these posts somewhat short, and so I’ll follow-up with my thoughts on how we can better celebrate and utilize defiance in next week’s entry. For now, please offer your thoughts and ideas. Should we welcome and embrace rebellion in Greek-letter organizations? How do we manage rebellion that’s positive versus defiance that’s dangerous? More to come...


Special thanks to Dr. Phillip Shriver, Historian and President Emeritus at Miami University, who wrote and taught about the Great Snowball Rebellion. You can read more here.
Posted by John Shertzer